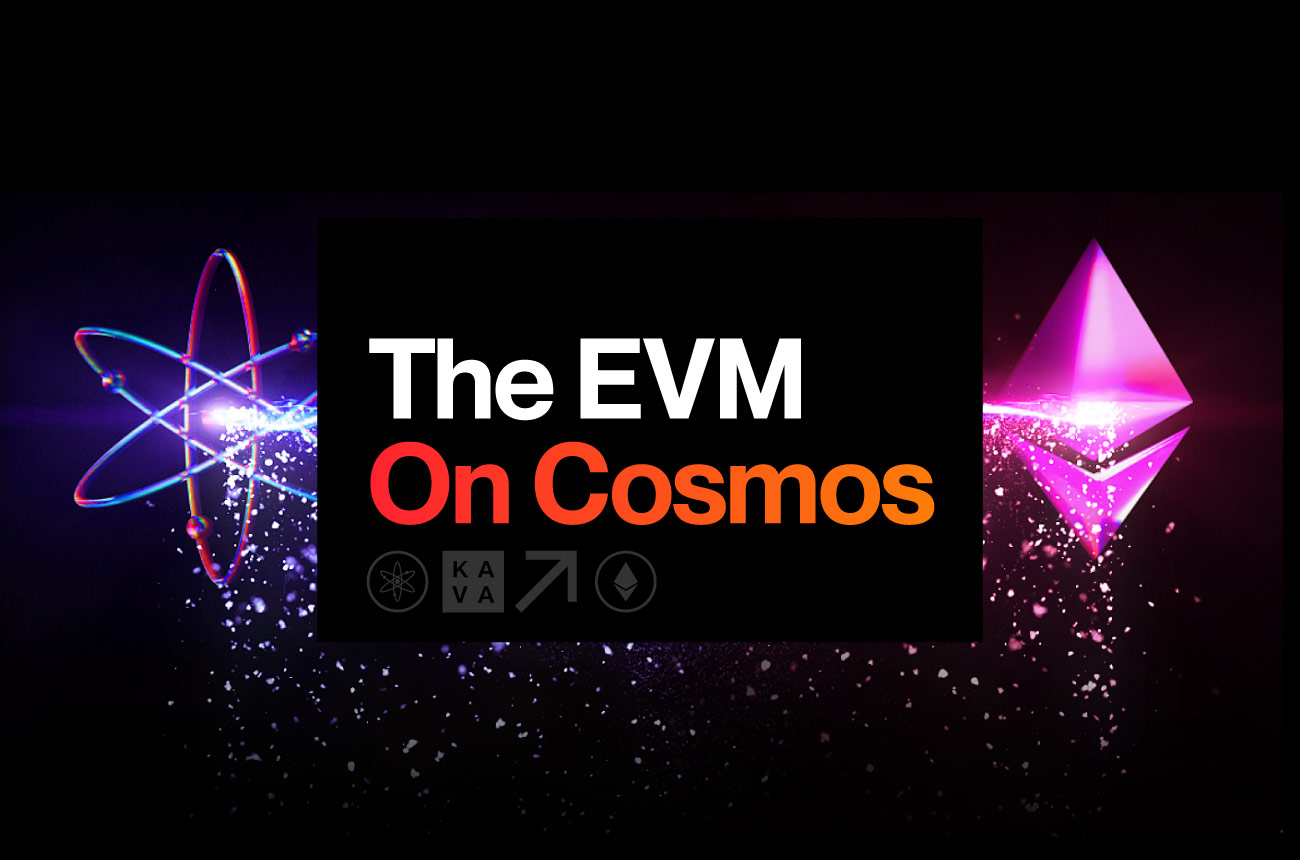 Kava’s Ethereum Co-Chain unlocks the unparalleled compatibility and developer support of the EVM on Cosmos.

Kava 10 is launching the Ethereum Co-Chain, which adds all the benefits of Ethereum Virtual Machine (EVM) support to Kava and enables rapid onboarding of many exciting new protocols.

The Ethereum and Cosmos ecosystems together represent a market cap of over $735.84B and an enormous userbase. Imagine what would happen if devs could build in one place for both ecosystems!

Kava’s #CosmosEVM mission is to bridge the gap between the two largest dev communities on the planet, Ethereum and Cosmos. This merge will lead to more equitable distribution of dev talent and resources and open up space for everyone to grow.

#CosmosEVM will also bring together all the communities supported by both ecosystems, meaning all users of Ethereum and Cosmos become part of the same family.

Kava has already onboarded 30+ #CosmosEVM Pioneers, attesting to the market need for an EVM on Cosmos. Let’s dive into what makes the EVM so important and why bringing it to Cosmos will open up a whole new world of possibilities for Kava.

What is the EVM?

At the heart of Ethereum is its Virtual Machine (EVM), a distributed “state machine” that handles smart contract deployment and execution on Ethereum.

A smart contract is an agreement between two or more people, represented as code processed on a blockchain (a public database that cannot be changed). The blockchain processes the smart contract automatically when certain conditions are met, eliminating the need for various third parties and intermediaries.

The EVM records the entire machine state according to fixed rules and enables builders to create decentralized applications (dApps) that run on Ethereum and thus adhere to the same fixed rules. For this reason, the EVM is more than a distributed ledger like Bitcoin — smart contracts unlock a whole new level of complexity for distributed systems.

If you have ever tried to send or receive and convert money from a foreign country, you’ll be familiar with the third-party fees smart contracts and blockchains can eliminate. Click here to learn more about smart contracts.

The EVM is often analogized as a global decentralized computer housing millions of smart contracts and ensuring they all adhere to the same fixed rules to find consensus for each state change (i.e., a transaction between two smart contracts).

For these reasons, the EVM is at the bedrock of Ethereum and a part of that “execution layer” you often hear about on Crypto-Twitter. You can go further down the EVM rabbit hole here, but the above is all you’ll need to know to understand the following:

Without the EVM, there would be no smart contracts on Ethereum.

That means no decentralized finance (DeFi), decentralized apps (dApps), or non-fungible tokens (NFTs). All of the above rely on smart contracts at a fundamental level.

Pros and Cons of the EVM

The EVM’s simplicity, versatility, security, and first-mover advantage have led to Ethereum creating the largest Web3 network and developer community on the planet.

Thousands of dApps rely on the EVM to function and transact with each other. Kava, for example, is becoming EVM compatible to enable a huge variety of dApps and developers to deploy and build on the Kava Network. This upgrade will allow them to benefit from the speed and scalability of Kava while also interoperating with both the Ethereum and Cosmos ecosystems.

With over $232.68 billion locked in DeFi, DEXs have become a hallmark of open finance.

DEXs can run on blockchains that do not currently support EVM, such as Kava Swap and Osmosis. However, when a DEX becomes EVM compatible, the ensuing access to ERC-20 assets and dev support drastically improves a DEX’s versatility and access to capital.

The increased popularity of Ethereum has left the network congested and has made EVM-based applications prohibitively expensive for users and devs.

For that reason, unlocking the EVM on a Cosmos SDK-based network like Kava, which has a tech stack that offers more scalability and speed for devs, is what Ethereum needs to unleash infinite growth and possibilities. Where Ethereum lacks, Cosmos shines. Read further to see how.

Is Cosmos the Final Frontier?

Cosmos is often called a “Layer 0” protocol, meaning it’s more than a blockchain — Cosmos is a decentralized network of interoperable, independent blockchains built with the Cosmos SDK, a blueprint for designing application-specific proof-of-stake (PoS) blockchains. In the Cosmos ecosystem, these sovereign chains are called Zones.

Cosmos is built on the Tendermint Core, a big distributed computer with a proof-of-stake (PoS) consensus mechanism.

While Ethereum grapples with steep transaction fees and congestion, Cosmos, by comparison, is a spacious and highly modular development environment where builders can develop Tendermint-compatible applications autonomous from a single execution layer.

Zones in the Cosmos ecosystem are sovereign, but most choose to interoperate with the Cosmos Hub ($ATOM), the “port city” serving as the router for the Inter-Blockchain Communication protocol (IBC).

Cosmos gained a significant leg up on Ethereum with the launch of the IBC, which allows disparate Tendermint-based chains to talk to each other. EVM devs must resort to cross-chain bridges to achieve the same feat, which introduces a whole suite of problems.

Also, Cosmos Hub is working on Interchain Security, which will allow IBC chains to borrow the security from another chain. Such a move may go a long way in drawing the Cosmos ecosystem closer together.

It means the defenses for any chain in the network may increase tenfold, reducing much of the outer community’s worries that smaller chains in the Cosmos ecosystem are less secure than dApps on Ethereum.

A major challenge for Cosmos is that despite accommodating a large dev community and the Cosmos SDK allowing for seamless blockchain deployment, the number of devs on Cosmos is well below Ethereum’s.

However, the IBC may be Cosmos’s “broadband moment,” and tech like that can be powerful when combined with Ethereum’s EVM. Vitalik Buterin has even pointed to the value of a Tendermint-like consensus mechanism.

Kava aims to do what no one has successfully done before — Bringing the EVM to Cosmos and bridging the gap between these builder communities to unlock new opportunities for users of both ecosystems.

Kava is the Hub for #CosmosEVM

As Ethereum and competing L1’s scaling struggles have highlighted, the future of blockchain and Web3 is multi-chain. To accommodate the strengths and weaknesses of all chains, these communities must work together. Kava is incentivizing the coming together of builder communities in the most optimized way possible.

The Kava Network’s Co-Chain architecture lets developers build with the EVM or the Cosmos SDK, then deploy to a single interoperative network. Kava chose to start with the Ethereum and Cosmos Co-Chains because these are by far the biggest ecosystems in Web3, with combined assets on-chain of ~$650B and a total DeFi TVL of over $28B.

There are thousands of active developers, dApps, and blockchain projects between these networks. The opportunity to merge the best elements of these two communities cannot be understated.

Blockchain sovereignty without isolation. Network security without congestion and unnecessary complication or limitations. That’s the promise of #CosmosEVM.

Such a development superhighway will carry all the users from these ecosystems and all the strengths of both networks.

Kava’s end game is to be a secure, lightning-fast Layer-1 blockchain that combines the developer power of Ethereum with the speed and interoperability of Cosmos in a single, scalable network.

That’s where Kava’s unique on-chain dev incentives come in. Including the ambitious Pioneer Program and the Kava Rise developer incentives program, Kava’s dedicated over $750 million to recruiting the best partners in the industry.

Over 30 projects have already joined as Pioneers of Kava’s Co-Chains, bringing a combined TVL of $8.71B+ and more than 700K+ users into the Kava ecosystem.

Kava is on track to become the world’s first #CosmosEVM network with its goal of reaching 100 protocols to the Ethereum Co-Chain and locking $10B+ in network TVL. Follow Kava on Twitter to learn more.